All images © James Sapsard.
Images may not be reproduced without the prior written consent of the copyright holder.

Click on each image for the full size version.

A Snapshot Of Bagpipes In Venice.
A rare sight captures everyone’s attention as the gondola with the brightly dressed bagpipe player passes the Palazzo Bembo, Riva del Carbon, 4793-4785, 30124 Venezia, built by the noble Bembo family in the 15th century. The building is now one of the European Cultural Centre’s contemporary art exhibition venues in Venice as well as housing a hotel on the top floor.
https://witness.theguardian.com/assignment/559d15cce4b032a39a3bb39a/1651283

Gianni Aricò’s Monument To Antonio Vivaldi.
“Le putte di Antonio Vivaldi 16-10 2006” by Gianni Aricò outside La Stazione Marittima di San Basilio, Fabbricato 248 30135 Venezia.
“Le putte” is a reference to the young ladies for whom Vivaldi composed and directed music at the “Ospedale della Pietà”. The Pietà Hospital, an institution for orphaned or illegitimate girls, foundlings and the female children of poor families was founded in Venice in 1346. The church of the Pietà, Santa Maria della Visitazione, which stood next to the orphanage was replaced by the present church which was built from 1745-1760. It was in the original Ospedale della Pietà that the Venetian priest-composer, Antonio Vivaldi (1678-1741) composed music for the putte or maidens. The ability of the Pietà girls for whom Vivaldi wrote and to whom he taught musical skills was regarded as the highest in Europe.
https://witness.theguardian.com/assignment/559d15cce4b032a39a3bb39a/1651288 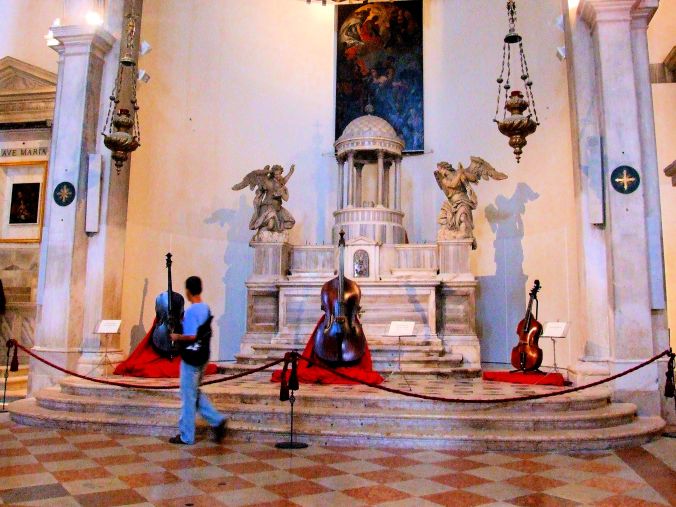 Music – A Question Of Timing.
This man looks as though he’s instrumental in the theft of a cello from the Museo della Musica in the restored neoclassical Chiesa di San Maurizio, S. Marco 2603 30124 Venezia. In fact, he’s this side of the rope barrier and the cello is firmly placed on the red display stand. The Museo also hosts an exhibition dedicated to the life and the work of Antonio Vivaldi, the world renowned Venetian composer.
https://witness.theguardian.com/assignment/559d15cce4b032a39a3bb39a/1651286

Grey’s Monument was built in 1838 as a monument to Charles Grey, 2nd Earl Grey, who passed the Great Reform Act of 1832.

These street players were good so I decided to video them, albeit with my digital camera on low-res, uncertain of the amount of disk space I had. I wasn’t sure what the sound quality would be. In the event, I captured an interesting 58 seconds.